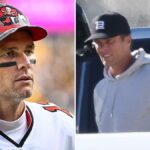 Tom Brady wasn’t making any new fans in Pittsburgh on Sunday after he not only lost to the Steelers, but was also caught on video in a heated exchange with his own teammates just seconds before the Buccaneers caught some relief at halftime.

Brady arrived in town the day before after attending the surprise wedding of his friend and former boss, New England Patriots owner Robert Kraft, in New York City on Friday without his wife, Gisele B?ndchen.

Tom and Gisele have been married for 13 years and have two children together, but reports have surfaced in the last few months that the couple grew apart, primarily after he decided to come out of retirement only 40 days following his decision to leave the league in February.

Since then, they’ve both reportedly retained divorce lawyers and are weighing their options on if they should pursue lives without each other.

Tom Brady showed emotions on the field once again after losing to the Pittsburgh Steelers Sunday. He’s rumored to be in a divorce battle with wife Gisele B?ndchen.
(Getty Images/ The Image Direct)

Fans online caught on to the frustration Brady seemed to show on the field, with social media chatter mocking the championship-winning quarterback for “losing his mind” while yelling at his linemen.

“You’re so much better than the way you’re f—ng playing,” Brady could be heard yelling at his teammates on a FOX broadcast.

“Tom Brady is losing his mind in Pittsburg and I’m all for it,” one fan wrote.

“No idea why Tom Brady wanted to participate in this NFL season,” another Twitter user wrote. “The only explanation that makes sense is that he got mad that Schefter scooped him and he didn’t get to announce his retirement with some dumb video. I’m 100% in on that.”

Another user simply wrote, “Tom Brady ruined his marriage so he could lose to Mitch Trubisky. There is still time Tom. Quit football and go to her.”

Tom Brady was in attendance for Robert Kraft’s wedding in New York City before heading to Pittsburgh the next day to prepare for his football game against the Steelers.
(The Image Direct for Fox News Digital)

Tom Brady arrived without his teammates in Pittsburgh, as he flew in from New York City.
(The Image Direct for Fox News Digital)

Brady’s representatives had no comment when reached by Fox News Digital about reports that the seven-time Super Bowl champion and his wife had each hired divorce attorneys.

The couple reportedly stayed in separate residences in Miami after evacuating from Hurricane Ian last month with their kids. They also spent most of the summer living apart, and he took an 11-day vacation to the Bahamas with two of his children, Benjamin and Vivian, while B?ndchen stayed in New York.

Part of the contention in their marriage is due to his decision to come out of retirement earlier this year. B?ndchen assumed Brady would have more time to spend with the family following years on the road as the most coveted athlete in the NFL.

“Obviously, I have my concerns — this is a very violent sport, and I have my children, and I would like him to be more present,” she told Elle magazine in the October issue. B?ndchen seemed ready to put football behind her after uprooting her family to be there for Brady as he pursued his passion for the sport.

“I’ve done my part, which is [to] be there for [Tom]. I moved to Boston, and I focused on creating a cocoon and a loving environment for my children to grow up in and to be there supporting him and his dreams,” B?ndchen added in the Elle interview. “Seeing my children succeed and become the beautiful little humans that they are, seeing him succeed and being fulfilled in his career — it makes me happy.”

Brady, who has son Benjamin, 12, and daughter Vivian, 9, with B?ndchen, also shares co-parenting responsibilities of his 15-year-old son, Jack, with ex Bridget Moynahan.

“At this point in my life, I feel like I’ve done a good job on that,” B?ndchen added. I have a huge list of things that I have to do, that I want to do. At 42, I feel more connected with my purpose.”