The NFL coverage maps are my guilty pleasure 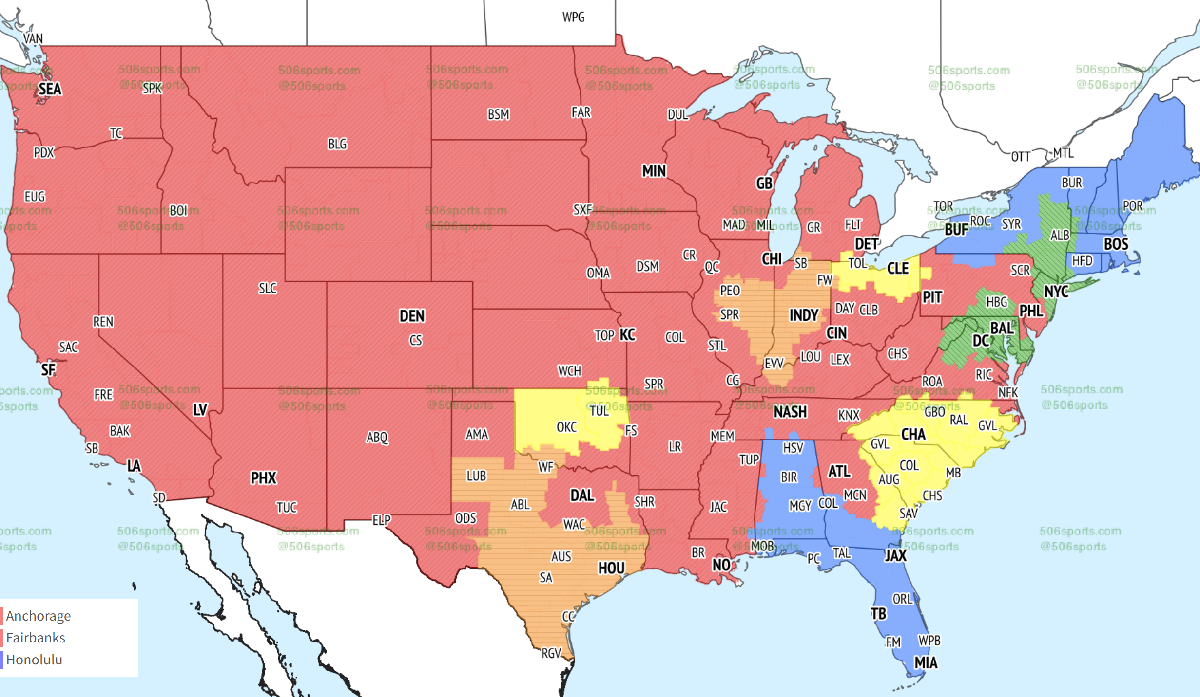 The NFL season is once again upon us, with the Los Angeles Rams and Buffalo Bills opening up the year Thursday night on NBC. (Admittedly a very sexy opening game matchup.)

It’s certainly nice to have it back, even if my own fandom is represented by an immensely dysfunctional franchise (the Chicago Bears) embarking on yet another attempted reset/rebuild. (The Matt Nagy era was only bearable once I realized it was much more “absurdist comedy” than “billion-dollar competitive enterprise”.)

In my opinion, it’s the top regular-season team sport for neutral fans, and the content! Good lord, the content, and the traffic that goes along with it. I can’t claim impartiality there after working in sports media for the last six years. The NFL is very good for business, even ones as far along the trickle-down stream as a site covering sports media itself.

Having said all of that, this isn’t going to be some huge season preview, nor will it be some sort of reflection upon the state of the NFL in the wider media landscape. It certainly could be that, and there’s a nonzero chance that the editors of this site wish that’s what I was actually writing! The world of NFL broadcasting is vastly different this year than it was last year, and it’s going to be legitimately fascinating to see what works and what doesn’t.

But that’s not what this is. Instead, I’m narrowing the focus down to one little quirk that absolutely makes my week during the NFL calendar: looking at the granular coverage maps provided by 506 Sports, the indispensable sports broadcasting site that has provided this service for years.

It’s hard to put into words exactly why browsing these maps is such a pleasing way to spend five or ten minutes every week. When I worked a long-hour office job it was certainly a quality distraction, but even after that era of my life ended I still returned constantly. In part it was just a nice “Oh right, I can look at this now” surprise on Wednesday, a day I’m rarely not looking to kill off en route to more entertaining portions of the week.

There’s also the fact that I, personally, enjoy looking at information in a simple, easy-to-understand, color-coded graphical format. It’s more than that, though; seeing things broken down by TV market is a different way of looking at the country than the usual state line format.

It’s occasionally a functional interest for me, too; I live in northern Indiana, in a market that features a healthy split between Bears and Indianapolis Colts fans. Especially now that Fox and CBS share conference rights, a few times per year there will be a week that features both teams playing on the same network in the same timeslot. Learning this ahead of time helps me make whatever plans I decide to make.

(Often, because Bears, those plans involve finding something to do with a free afternoon on a fall Sunday, unburdened by whatever compulsive disorder drives me to watch them lose 27-13 to the Miami Dolphins when I could be doing literally anything else.)

Because Chicago is Chicago, the Bears will also always end up with multiple national games or late-afternoon windows each year, which means I get to see which game I’ll actually have available to watch in the 1 PM slot, which is always a fun little bit of intrigue. Extrapolating out, I also enjoy seeing when certain markets end up as an island in a sea of a different game and trying to figure out why that is. Again, this is impossibly nerdy even on the scale of “having covered sports media/broadcasting for work for six years plus now”, but here we are.)

Thanks are in order to The506, too. They certainly do more than just NFL maps; they serve as an important weekly tool for all kinds of game listings and announcing schedules. There’s also their wonderful archive of historical broadcast booth information, with announcing pairings going back to the 1950s across multiple sports.

I owe them a debt, because while 10 minutes of idle browsing per NFL week isn’t that much on a granular level, it’s certainly added up to many, many hours of pleasant distraction for me through the years. I can’t recommend it more, even just as a resource.

Or, hey, maybe you just really fucking love maps. If so, you’re in the right place.

The post The NFL coverage maps are my guilty pleasure appeared first on Awful Announcing.