Should the Seahawks be concerned about Week 10 loss to Bucs? – Seattle Seahawks Blog- ESPN

Pete Carroll didn’t place any blame for the Seattle Seahawks’ 21-16 loss on lingering jetlag from their long trip to Munich, Germany, as sluggish as they looked early on while the Tampa Bay Buccaneers raced to a 14-0 halftime lead.

He didn’t fault the turf either, noting they weren’t the only team that struggled to find its footing on the slick surface at Allianz Arena.

And so the best explanation for the Seahawks’ worst performance since their Week 2 debacle in Santa Clara may be that they simply got beat by the greatest quarterback of all time and a team that’s better than Tampa Bay’s 4-5 record entering the game indicated.

Whatever it was, the Seahawks (6-4) played too well during the four-game winning streak they brought across the Atlantic to conclude after one loss that their bubble is bursting, especially given their strong second-half rally. But the way they played for the majority of the NFL’s first ever game in Germany is at least a little troubling given the resemblance it had to their struggles on both sides of the ball during their 1-2 start.

“We talked about how important it is to realize that we were right back in this game and that we weren’t out of it,” Carroll told reporters. “We never thought that and we didn’t show that. That is the same kind of mentality that’s going to help us finish the season and do something special with this year. We don’t think anything changes in that regard. Just on this night, they did a better job than we did.” 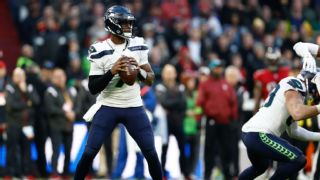 Third down was the story, with Seattle going just 1 of 9 on offense and allowing the Bucs to convert on 10 of 15 chances for a 66.6% success rate that nearly doubled their average entering Sunday.

By their own admission, the Seahawks underestimated Tampa Bay’s running game, which was ranked last in the NFL in yards per game (60.7) and per attempt (2.98). Seattle’s defensive game plan was more focused on collapsing the pocket with a four-man rush and dropping into coverage to stop Brady and the Bucs’ pass-catchers. That’s why they made run-stuffing defensive tackle Bryan Mone a healthy scratch in favor of Myles Adams, a better interior rusher.

The Seahawks could’ve used Mone as Tampa Bay’s backs ran for 164 yards on 38 carries, nearly double the rushing attempts they had averaged before Sunday. According to ESPN Stats & Information, the Bucs ran by design on 57% of their plays (excluding kneel-downs), the highest rate for a Brady team since 2018. Carroll was particularly galled at how they iced the game on the ground with their four-minute offense, preventing Geno Smith and Seattle’s offense from getting the ball back.

“It’s really disappointing,” Carroll said. “They have not been running the ball very consistently, so coming into the game we were hoping just to be able to keep it under wraps and be able to deploy for the throwing game, and they did better than we thought they would. And they finished running the ball in the fourth quarter, which kills me.”

The game plan built around stopping Brady didn’t do that, either.

Cody Barton’s leaping interception in the fourth quarter was the kind of play the Seahawks envisioned when they decided to only blitz three times and instead keep seven defenders in coverage most of the time. But that strategy only produced one official QB hit. According to NFL Next Gen Stats, the lack of pressure allowed Brady to average 2.78 seconds to throw, his highest since Week 4 of last season. He posted his best Total QBR, completion rate and yards-per-attempt average in any game this season, leaving the Seahawks’ defense looking little like the resurgent unit that had been one of the NFL’s best over the past four weeks.

Their only other defensive highlight — Tariq Woolen’s third-quarter interception on a halfback pass to Brady — went for naught. The Seahawks had a chance to cut Tampa Bay’s lead to four when Smith drove them deep into Bucs territory on the ensuing possession, be he lost a fumble on a designed QB draw.

By that point, the Seahawks had put the game in Smith’s hands.

Smith finished with his typically efficient line (23 of 33 for 275 yards) and threw a pair of touchdown passes to Tyler Lockett and Marquise Goodwin. His on-the-run throw into the end zone to a diving Goodwin had a completion probability of only 24.4%, according to Next Gen Stats. Smith now has six touchdown passes with a completion probability under 25% this season while no other quarterback has more than two.

Smith also led the Seahawks in rushing with 22 yards, five more than Kenneth Walker III had on 10 carries. But his mixed bag of a day included just one completion on five third-down throws — and the killer fumble.

Smith has played at a Pro Bowl level this season thanks as much to his sound decision-making as his talent, but this was his second straight game with a costly mistake. And unlike last week, when he led the Seahawks to three consecutive touchdown drives and a victory over the Arizona Cardinals after throwing a pick-six, they were in too big of a hole to climb out of it this time.

“Obviously I’ve got to protect the football,” he said. “That can never happen. Guy made a great play as I was going down, but if I don’t turn that over in the red zone, I think it’s a different game.”

The silver lining is that the Seahawks are heading into their bye still atop the NFC West with a half-game lead over the 5-4 San Francisco 49ers. They have some difficult matchups left, including a Christmas Eve meeting with the Chiefs in Kansas City, but will play five of their final seven games at home.

But the Seahawks’ 12-hour flight back to Seattle might seem even longer after this loss.

“I think this experience is going to humble us,” said defensive tackle Al Woods, “and get us back to the basics and just start all over again.”