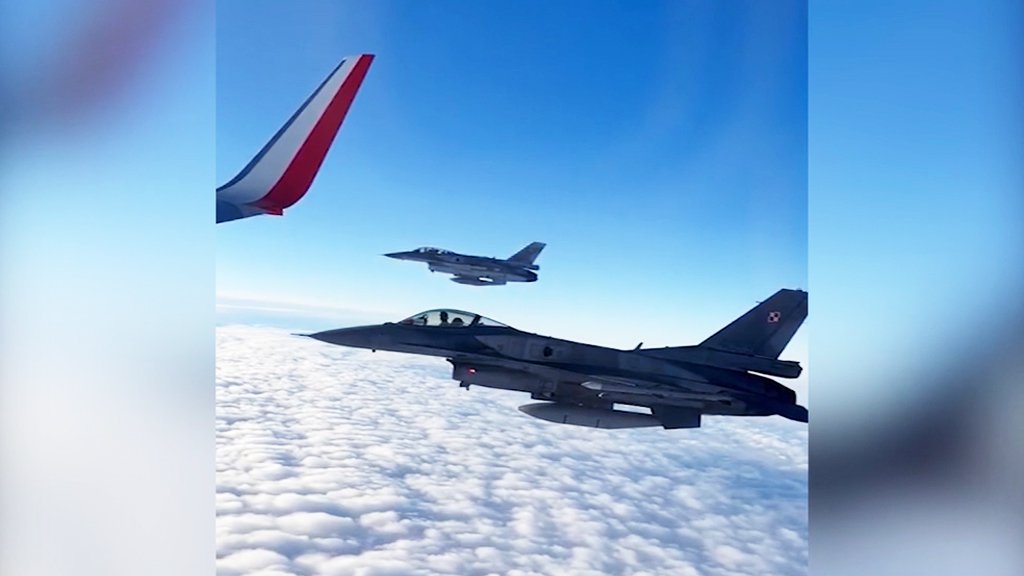 To view this video please enable JavaScript, and consider upgrading to a web
browser that
supports HTML5
video

Poland’s national football team were escorted to Qatar by a pair of F-16 fighter jets yesterday as they made their way to the World Cup.

The show of strength comes after two Polish citizens were killed by a missile which struck a village on the Polish-Ukrainian border earlier this week, prompting an international response.

Footage of the fighter jets escorting the plane was posted on the Polish team’s official Twitter account.

‘We were escorted to the southern border of Poland by F16 planes,’ the tweet said. ‘Thank you and greetings to the pilots!’

The Polish team, led by Barcelona striker Robert Lewandowski, were later photographed leaving the craft after landing safely in the capital of Doha.

The missile strike on the border town of Przewodów was the first incident from the Russian war in Ukraine to have directly impacted a member of Nato, sparking fears it may broaden the scope of the conflict.

Ukrainian president Volodymyr Zelensky later called the strike ‘a very significant escalation’ and said there was ‘no doubt’ the missile came from Russia.

The team thanked the pilots for their armed escort before landing safely in Qatar later that day (Picture: Polish National Football Team)

Every World Cup 2022 home and away kit released so far

How hot will it be in Qatar and how will teams deal with the heat?

Which Premier League players will miss the World Cup with injury?

When does the Premier League resume after the World Cup?

Although the source of the explosion has not been officially confirmed, the latest US intelligence suggests the strike may have been caused after a Ukrainian air defence system intercepted a Russian cruise missile.

His words were backed up by Nato general secretary Jens Stoltenberg, who also hinted that there was no indication of a deliberate attack on Poland from Russia.

Following an emergency meeting, Nato eventually agreed that regardless of the source of the explosion, Russian hostilities were ultimately to blame for the two civilian’s deaths.

But despite the uncertainty the Polish government appeared unwilling to gamble on the safety of its national team, rolling out the impressive defensive escort to ensure the players landed safely in the Middle East.

The team later posed for pictues after landing in Doha ahead of Tuesday’s Group C clash against Mexico (Picture: Polish National Football Team)

As for the players, the Polish …read more

NFL Week 12 model projections: Predictions for Cowboys vs. Giants, Browns vs. Bucs and every NFL game – The Athletic