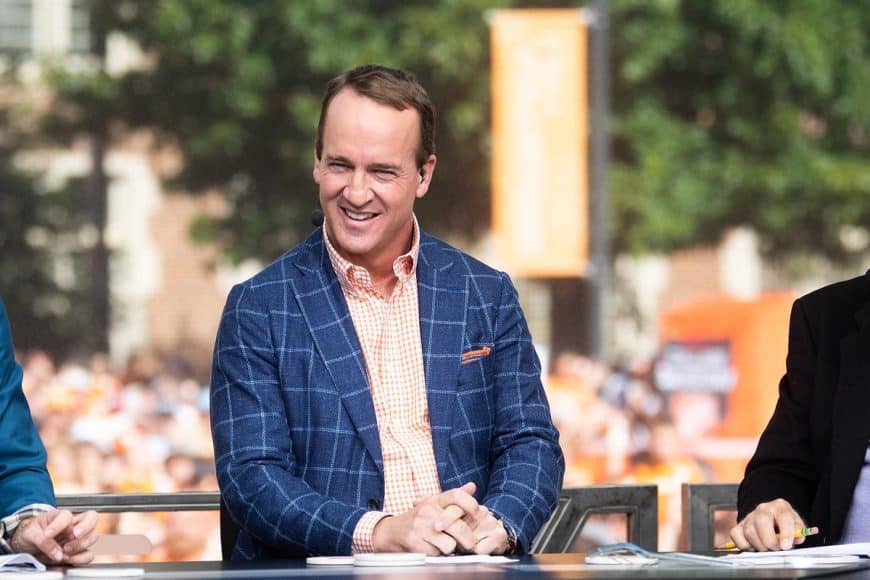 Peyton Manning is one of the three best quarterbacks in NFL history. That isn’t up for discussion. He retired with every passing record and won two Super Bowls with two different teams. If anybody knows what success is supposed to look like, it’s him. That is why getting his opinion on Justin Fields is interesting. The Hall of Famer will watch the Chicago Bears visit the New England Patriots on Monday Night Football. So he’ll get a close-up view of the young QB.

Jason Lieser of the Chicago Sun-Times had a chance to speak with Manning days before the game. It would’ve been easy to criticize everything wrong with Fields. Everybody else does. However, Manning was more sympathetic. Believe it or not, he didn’t get off to the most glorious start in his career either. He threw more interceptions (28) than touchdowns (26) through his first 16 games, and he already had two Hall of Famers on the roster with him in Marshall Faulk and Marvin Harrison. Manning admitted he was anything but polished at the time.

“I remember my rookie year just hoping the first read was going to be open because I couldn’t remember where the second and third reads were all the time,” said Peyton, who threw a league-high 28 interceptions in 1998. “You only have about 2½ seconds. But the more you practice those plays and the more you start playing, you’re doing it quickly…

…Said Peyton: “Watching film, you see his toughness, his athleticism. And you can tell when he really is comfortable in certain plays, he can make all the throws. It’s just natural if you’re not comfortable sometimes, things don’t look so good.

“Reps and playing is the best way to do it. And sometimes you have to go through some growing pains.”

Luke Getsy said almost the same thing this week during his presser. He thinks Fields is trending in the right direction. It takes time to learn the intricacies of an NFL offense. The only way for him to get better is time, reps, and patience. There will be more mistakes to come. It is on the Bears to help him through them and do everything possible to keep the QB healthy. They’ve already made adjustments to the offensive line in hopes of improving the protection. N’Keal Harry should also make his debut at wide receiver.

Any little bit helps. Justin Fields has shown progress in recent weeks, upping his passer rating from 50.0 to 87.3. It hasn’t been pretty, but it’s something. These next three games should be an excellent barometer for how far along he is with New England, Dallas, and Miami. Peyton Manning knows what he’s talking about. These are the challenges every young quarterback faces. Some need more time than others to figure it out.