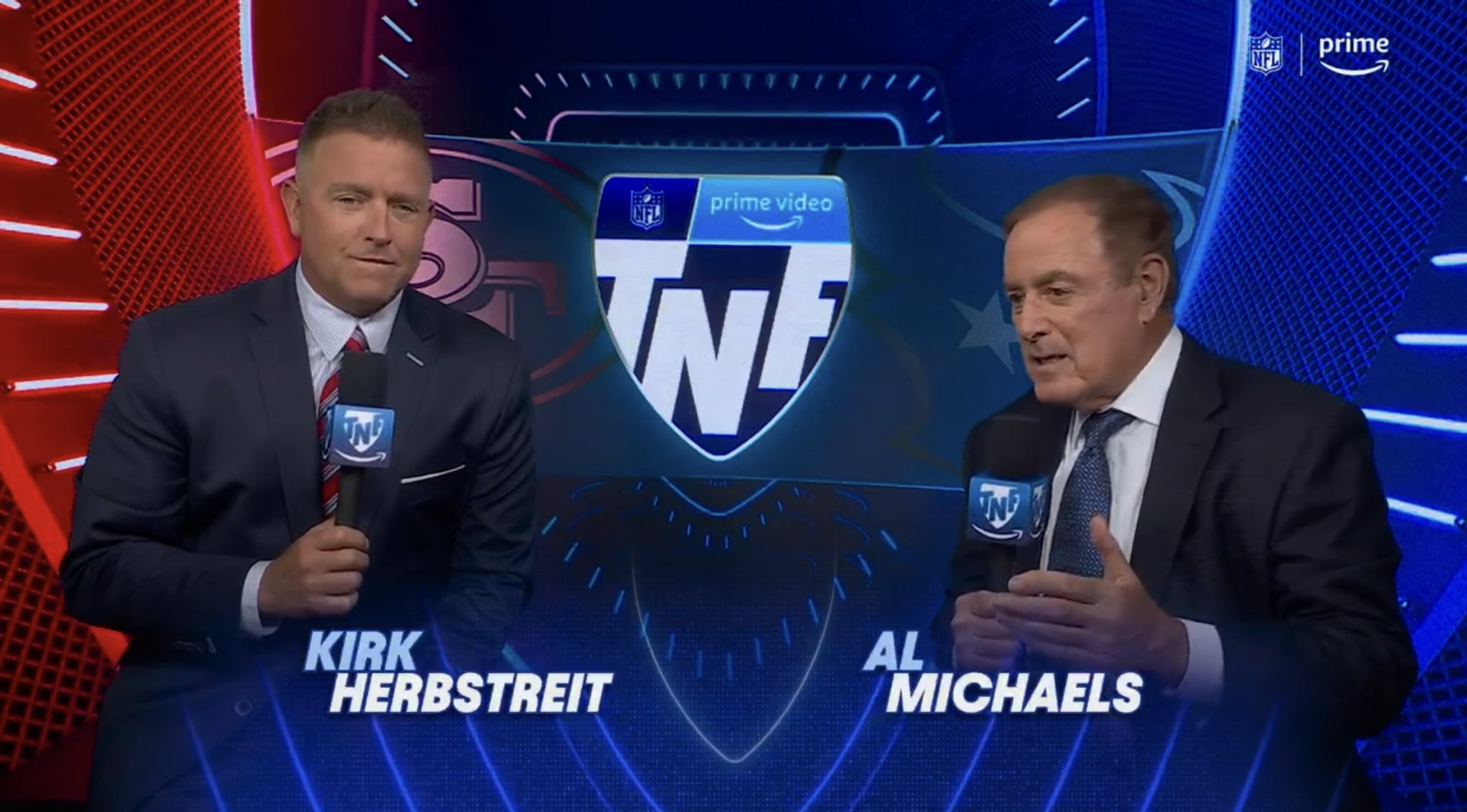 Amazon Prime Video is the exclusive home of Thursday Night Football, beginning with the 2022 NFL season (TNF games have been simulcast on Fox in the past, but now the games are exclusively on Amazon; the local markets of the teams involved in a game will still carry the game on free over-the-air television).

The regular-season Amazon TNF debut isn’t until Sept. 15, when the Los Angeles Chargers take on the Kansas City Chiefs at Arrowhead Stadium.

But Thursday night’s preseason game between the San Francisco 49ers and Houston Texans served as the official debut of the Amazon TNF broadcast.

Here’s a look at Amazon’s TNF studio team — which includes Ryan Fitzpatrick — and set on the sideline at NRG Stadium:

And here’s a look at the Amazon TNF scorebug:

Here’s an example of the broadcast in action on a Texans touchdown and extra point, to go with replays:

Here’s a look at the Amazon TNF broadcast in action on a Texans TD and XP (and replays) before going to commercial. #TNFonPrime pic.twitter.com/zCy78h9I8J

And here are more examples of the graphics and features of the broadcast:

Polish up the down-and-distance a bit on the scorebug, but otherwise its

Picture quality is good for me. The music slaps, too. pic.twitter.com/TiVnreXTyj

The NFL world has had a lot to say about the Amazon TNF broadcast debut, and most fans have been impressed. Here’s a sampling of the reaction on Twitter:

If you weren’t a sports media nerd and walked into a friend’s house with the game on, you’d have no idea this was a maiden voyage.

IMO not sticking out in a bad way is a win and they are at a minimum already over that hurdle. It’s a good start.

Nice chemistry between Al Michaels and Kirk Herbstreit. Even though this is their first game together, it sounds like they have been together for several seasons.

I know that this is exactly what Amazon was shooting for, but so far the production for TNF feels like a cross between SNF and the A-crew for CFB on ESPN.

And I mean that in the best possible way. This has been a very good first outing.

Pregame: A
Score bug: A+
Broadcast team: A+

It actually feels like Amazon and not just another TNF game from NFLN with Fox/CBS/NBC.

Ryan Fitzpatrick is every bit as good on Thursday Night Football pregame as we thought he’d be.

Good start for Amazon Prime with their first NFL TNF broadcast tonight of 49ers/Texans preseason and a good dry run before it starts for real in September.

Al Michaels and Kirk Herbstreit give it legitimacy. Ryan Fitzpatrick and Richard Sherman could be good studio analysts too.