The Miami Dolphins are a professional American football team based in the Miami metropolitan area. They compete in the National Football League (NFL) as a member team of the league’s American Football Conference (AFC) East division. The team plays its home games at Hard Rock Stadium, located in the northern suburb of Miami Gardens, Florida.

They began play in the AFL in 1966. The region had not had a professional football team since the days of the Miami Seahawks, who played in the All-America Football Conference in 1946, before becoming the first incarnation of the Baltimore Colts. For the first few years, the Dolphins’ full-time training camp and practice facilities were at Saint Andrew’s School, a private, boys boarding prep school in Boca Raton. Miami joined the NFL as a result of the 1970 AFL–NFL merger. 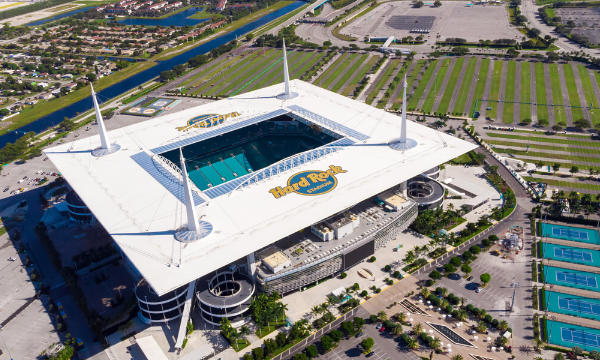 Hard Rock Stadium is a multi-purpose stadium located in Miami Gardens, Florida. The stadium is the home field for the Miami Dolphins of the National Football League (NFL) from 1987 – Present. The first preseason game for the Dolphins was played on August 16, 1987, against the Chicago Bears. There are 65,326 permanent seats for fans.

Source of wealth: Much of his fortune came from his businesses he started in Texas. He is the founder of two companies, EDS (Electronic Data Systems) and Perot Systems.

When purchased team and for how much:  In February 2008, Ross bought 50 percent of the Miami Dolphin franchise, Dolphin Stadium (now known as Hard Rock Stadium), and surrounding land, from then-owner Wayne Huizenga for $550 million, with an agreement to later become the Dolphins’ managing general partner. On January 20, 2009, Ross closed on the purchase of an additional 45% of the team from Huizenga. The total value of the deal was $1.1 billion

Ownership philosophy: At 82, managing general partner of both the Miami Dolphins and Hard Rock Stadium. The role is the culmination of one of his long-held dreams. Dolphins have been a lifetime passion for him.