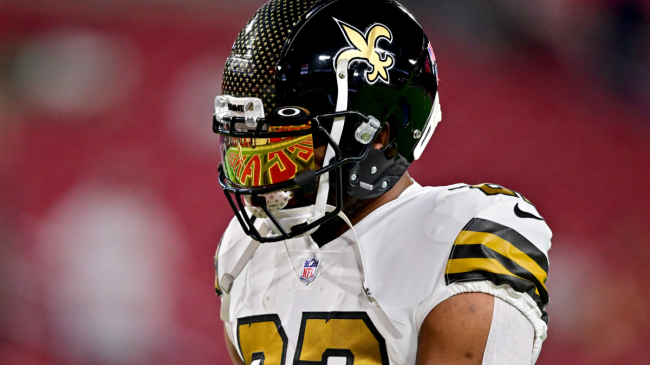 Mark Ingram became the center of attention for a questionable decision in New Orleans’ most recent loss.

While playing the division rival Bucs, the running back stepped out of bounds a yard short of getting a crucial first-down call. On the reception, it appeared he could’ve gotten the extra yard easily, but he scampered out of play in order to avoid contact with a defender.

Rather than get a new set of downs, the Saints faced a third-and-one late in the fourth quarter of action. An incomplete pass led to a fourth down decision, and the Saints opted to punt as they were up two scores.

The rest is history as New Orleans saw a 16-3 lead evaporate over the final five minutes of action. While Mark Ingram’s questionable decision didn’t seem monumental in the moment, it’s now been put under a microscope.

This is why we lost the game… pic.twitter.com/9xzrpZu3J6

Had the Saints been able to land a first down, they conceivably could’ve run another couple of minutes off the clock. At best, they notch another score. At worst, they force Tampa to use timeouts. Instead, New Orleans punted at midfield which sparked a patented Tom Brady comeback.

The Bucs would score the game-winning touchdown with just six seconds remaining in regulation to escape with a 17-16 win over a division rival. Rather than move to within a half-game of the NFC South lead, the Saints fell to the bottom of the standings.

After the game, fans flocked to social media to post reactions to the loss. Mark Ingram’s missed first down was a focal point. The tailback saw the criticism and responded with an apology to Saints supporters.

“I’m sick about this one. Regardless of circumstances or how I feel I have to get that fresh set of downs for the squad. I apologize to my teammates my coaches and my city for a crucial mistake. We work way too hard and sacrifice blood sweat and tears. I will be better.”

While some blame Ingram, others say the fault is on the coaching staff. Ingram was playing hurt, and rather than insert the more potent passing game option, Alvin Kamara, into the game, they kept Ingram on the field.

THIS WAS THE GAME

Saints put an injured Ingram back into the game

2nd & 8, he caught a wide open pass but ran out of bounds short of sticks because he was too injured

After the play, you see the running back fall to a knee in pain despite avoiding contact. He clearly wasn’t 100%. Still, given the chance to do it again, Ingram would tell you he should’ve gotten the first down.