The Manchester United icon got social media talking at the weekend, when he attended the NFL clash between Green Bay Packers and New York Giants at Tottenham Hotspur Stadium.

An irritated looking Keane, 51, set Twitter abuzz when he was spotted by telly cameras snubbing a fan asking for a selfie.

NFL host Laura Woods pointed out the amusing clip during the coverage, and tweeted after the game, accompanied by laughing emojis: “My favourite part of Sunday.

Most social media users saw the funny side of the incident, although Terry was not impressed. 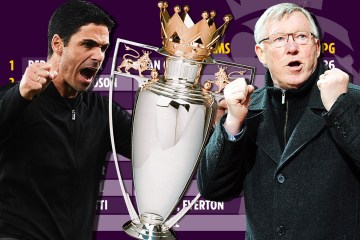 He wrote in response to Woods’ tweet: “It takes 2 seconds to have a picture taken with the fans. I think this is poor!”

Woods replied: “Ahhh John to be fair I think he says wait until half time so it probably looks worse than it is, still made laugh though.”

The flip-flopping former England star then appeared to change his mind again – deleting the post for a second time.

Most read in Football

Terry’s deleted tweets didn’t go unnoticed, however, with fans having a bit of fun with them – claiming he didn’t want a beef with Keane.

One wrote: “Terry has bottled it there, he never did fancy it against a proper hardman.”

A second wrote: “Got scared didn’t he.”

Another added: “He can’t mess with Roy.”

And a fourth posted: “He’s just jealous Keane was a better captain than him.”