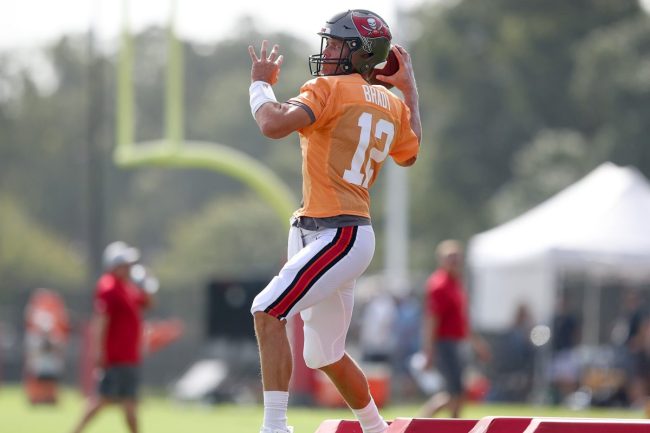 Bucs fans are beginning to panic following the latest report from their head coach regarding Tom Brady’s return to action. The superstar quarterback has taken a leave of absence this preseason to deal with undisclosed personal matters.

It was originally said that Brady would rejoin the team in time for the second preseason matchup against the Titans. Now, that date has been pushed.

Head coach Todd Bowles appears to have no answer for when his star passer will return to the field, and Brady has kept a tight lip on the subject.

“Todd Bowles said he doesn’t have a firm date for Tom Brady returning. Said it’ll be after Titans game, and they’ll revisit it after that.”

With Brady’s stint away from the team continuing to extend, many Tampa Bay fans are beginning to panic.

The Bucs will be without their quarterback for their second preseason matchup, and with the regular season slated to start in less than a month, many Tampa Bay fans are beginning to hit the panic button.

Check out the latest reaction surrounding Tom Brady’s return to the field.

The longer they remain vague about this the weirder it gets for me.

This is… interesting? To say the least https://t.co/SSg6wa7L2s

brady’s return went from 10 days to a TBD … now this is getting real weird https://t.co/MD7LaoGlFF pic.twitter.com/fdujubxQyU

Are we positive he isn’t considering retirement?? https://t.co/oD3qTmlKjb

Brady doesn’t want to play anymore. He’s 45 and had his face redone. https://t.co/J1vhFWyHaj

Dad just went to the store to get milk and cigarettes, he’ll be back….. Right? https://t.co/gUy9wdRzd5

Or maybe he just wants out of Tampa?

Brady trying to finesse his way out the team

Kyle Trask under center for the season opener? Anyone? Anyone?

Whatever the case, this situation continues to get weirder by the day. We likely won’t hear an update until after the Bucs’ preseason contest this weekend.

Hopefully, Tom Brady will soon make a statement on his return that helps ease the nerves of the Tampa Bay faithful.

Want more from BroBible? Follow us on Google News.