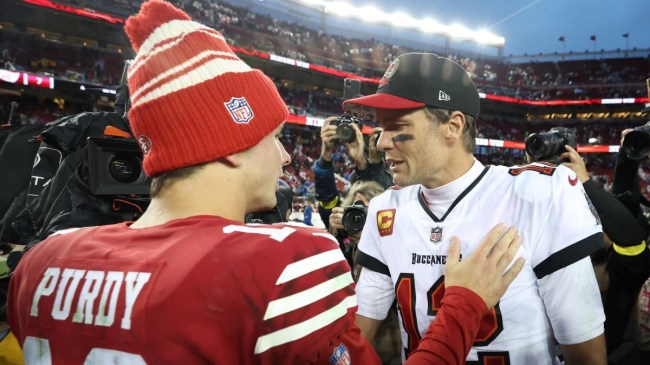 If you hadn’t heard of San Francisco 49ers rookie quarterback Brock Purdy prior to Sunday’s game against the Tampa Bay Buccaneers, you almost certainly have now.

College football fans will remember Purdy as the often inconsistent gunslinger that led Iowa State to some of its biggest wins in program history.

The Niners then made the Arizona native Mr. Irrelevant when they selected him with the final pick in the 2022 NFL Draft. That pick likely came with little in the way of expectations. Little did they know that Purdy would quickly become the team’s starter during a playoff push.

San Francisco lost its initial starter, Trey Lance, to an ankle injury early in the season. Backup Jimmy Garoppolo then took the reins and looked solid before suffering an injury of his own against the Miami Dolphins.

Purdy came in for Garoppolo and shined in relief. The rookie went 25-of-37 for 210 yards, two touchdowns and an interception in a 33-17 win.

But expectations remained low for his first career start. That’s because he was set to square off against the Tampa Bay Buccaneers. The Bucs not only boast one of the league’s best defenses, but also a legend in superstar quarterback Tom Brady.

Though the rookie’s teammates still had his back.

Purdy was unphased. He went 16-of-21 for 185 yards and two touchdowns and the Niners rolled to a 35-7 victory. No quarterback had ever achieved what Purdy did on Sunday.

He even had his parents there to see it. Though it turns out they weren’t there for him.

Purdy’s parents were understandably emotional after hearing the entirety of Levi’s Stadium chanting his name.

What a moment. This is Purdy special for the fam

But maybe they were tears of sadness? As it turns out, his parents had purchased tickets to the game long before it was known that Brock was starting. And they weren’t going with the intent to see him.

From @PSchrags just now on @gmfb… Brock Purdy’s parents bought a ticket to the Bucs game to see Tom Brady a while ago before they knew their son would be starting. To see their son outplay Brady yesterday must’ve been surreal

NFL Network’s Peter Schrager reported Monday morning that they bought tickets in order to see Brady play long before the injury to Garoppolo.

As it turns out, they got to see their son beating the GOAT. Talk about a plan coming together.

The post Brock Purdy’s Parents Bought Tickets To Game Against Bucs To Witness Greatness But Not To Watch Their Son Play appeared first on BroBible.