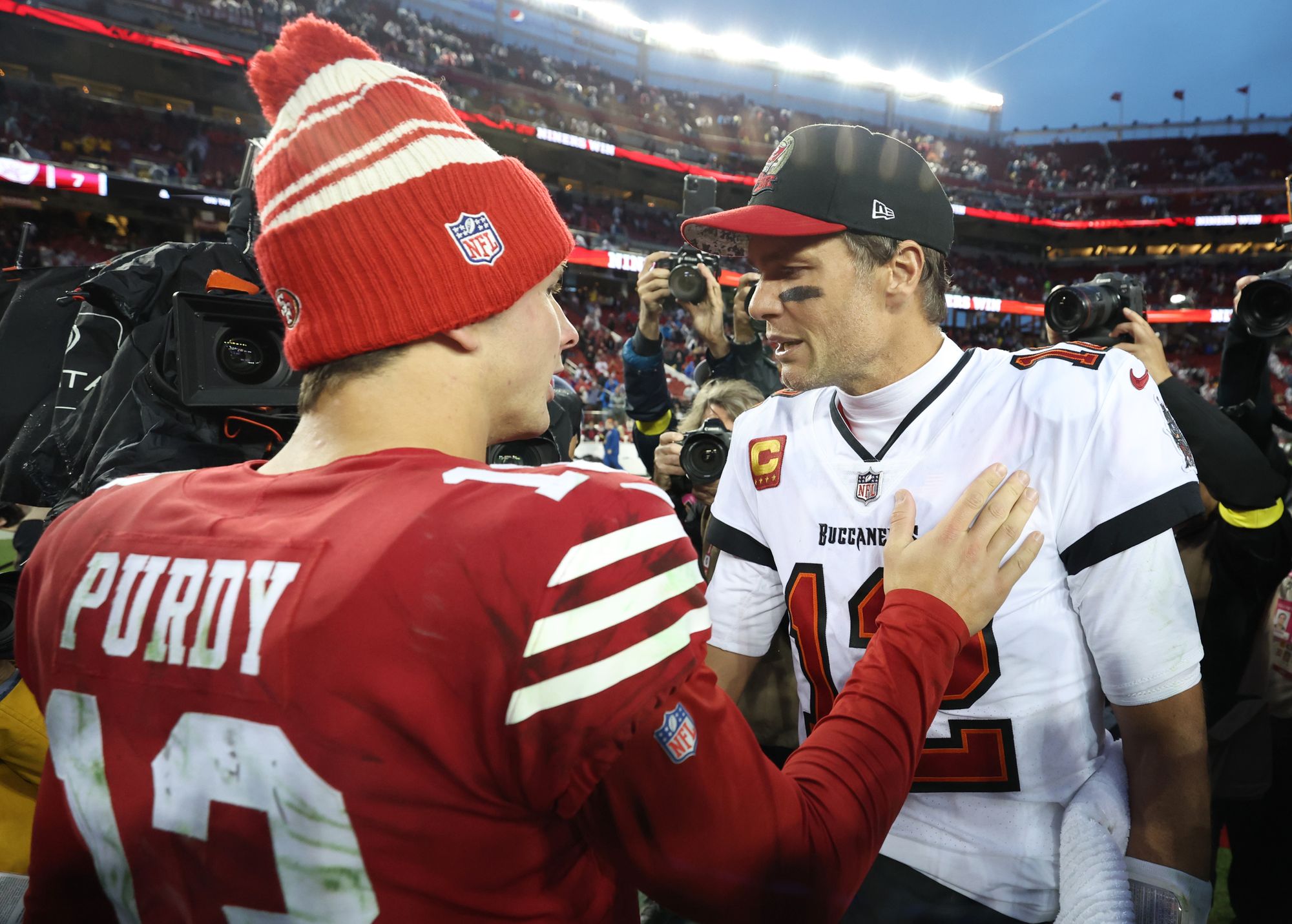 Remember when a relatively unknown backup quarterback, who was drafted in the sixth round, was said to “lack great physical stature,” and was not expected to go very far in the NFL, took over for an injured starter and took a talented team all the way to the Super Bowl?

I’m talking of course about Tom Brady coming in for Drew Bledsoe in Week 2 of the 2001 NFL season, leading to an “improbable” Super Bowl run that year, and in the ensuing decades, many inevitable (some would even say perfunctory) New England Patriots’ Super Bowl runs. Brock Purdy was just two years old as the world learned Tom Brady’s name. Yes, comparisons between the two QBs — both of whom were considered to be mediocre prospects before they took their first snaps — are wildly premature.

But no one can deny the allure of the storyline: A quarterback emerges from obscurity and rises to the moment.

Starting in his first-ever NFL game on Sunday, Brock Purdy wrote the next page in his young career, playing with the swagger and polished poise of a veteran. The San Francisco 49ers destroyed Tom Brady and the Tampa Bay Buccaneers 35-7, and inched one step closer toward improbability.

But don’t worry, Niners fans, there is still plenty of adversity to be triumphed over. Like some kind of Greek tragedy, for every step the 49ers take forward, there are at least one or two injury-riddled steps backward. As of this writing, the news about Deebo Samuel is brighter than when he was carted off the field at Levi’s Stadium yesterday, with several headlines this morning saying that Samuel “appears to have avoided major injury.” (It’s “most likely” a high-ankle sprain.) Not even Purdy came out of yesterday’s game unscathed, suffering a “minor oblique injury.”

You might have heard that yesterday was only the second time that Tom Brady, a San Mateo native, had played in San Francisco during his seemingly immortal career. Brady reportedly bought 100 tickets for family and friends, and his parents were in attendance. Brock Purdy’s were at yesterday’s game, too, and the stage was set for an emotional rollercoaster.

Purdy completed 16 of 21 passes for 185 yards, throwing two TDs. When he ran the ball in for the score on a 2nd and goal at the start of the second quarter to make it 14-0, I stopped seeing him as the backup back-up quarterback — he was just “The Guy.” Christian McCaffrey was also the guy, and had his best game as a 49er with 119 explosive rushing yards. George Kittle was Purdy’s go-to guy, with lots of short-yard receptions up the middle, especially on 3rd downs.

Tampa Bay was actually in the game, for a minute. Tom Brady and his twilight team had a decent first drive that led to a missed 55-yard field goal attempt; Brady later found a wide-open Mike Evans for a long touchdown pass, which would have made it 7-7 and an actual game, but that TD was nullified by a Tampa penalty. It was a giant goose egg for the Bucs, and the game was blown up before you could blink.

About halfway through the second quarter, with the Niners around Tampa’s 25-yard line on a 3rd and 5, the Bucs blitzed as Purdy dropped back and fired, finding Christian McCaffrey at the corner of the end zone for a TD, making it it 21-0 49ers. (Purdy got crushed after throwing the ball.) Before Robbie Gould could kick the extra point, the catch was reviewed for several long minutes — it eventually stood — offering a pause for the fans to consider what they were witnessing.

Cue the Purdy parent cam: Purdy’s Dad wiped away tears as his son racked up the TDs. Also cue the Tom-Brady-looking-despondent-and-throwing-a-tablet cam. With the game about 30% played, the emotions swung between those two emotional poles and those two players.

There was more game to be played, more Niners’ touchdowns, more McCaffrey, and more ineffectual Tampa offense. The game eventually devolved into real-time practice for Brady and the Bucs (who are actually more-than alive in the playoff hunt), and more real-time reps for the young Purdy. Niners’ fourth-string quarterback Josh Johnson even got in on the act, handing off the ball often to running back Jordan Mason, who quickly tallied 56 yards on 11 carries.

There was, however, a trail of wounded red-and-gold players limping in the wake of victory.

Deebo Samuel was having another excellent game with 43 yards on four receptions, when he took an awkward, awful looking tackle in the second quarter. (He actually fumbled the ball, which Niners’ fans immediately forgot.) Let the condemnation for the play call begin: Niners’ great Jerry Rice tweeted his displeasure at Samuel being put in a vulnerable position, resonate of Trey Lance’s season-ending injury in Week 2.

Jerry Rice is not happy after Deebo’s injury

“Yeah, I mean, we’ll see how it goes this week,” Purdy was quoted as saying by NBC Sports at the postgame press conference. “Just felt a little tight at the end, just from taking some hits. But honestly, man, like, if I needed to play throughout the rest of the game, I definitely would have. So, I’m going to get some treatment on it and be ready to roll.”

The 9-4 49ers will travel north to play the 7-6 Seattle Seahawks on Thursday; the Niners will host the Washington Commanders, and their star “backup” quarterback Taylor Heinicke, on Christmas Eve.